ROGIANI has been featured of the covers of over 450 magazines in addition to countless editorials, dvd/videos, albums, tv shows and movies.

Recognizing individuality as the freedom of the future, ROGIANI offers customization of nearly every aspect of their products, all of which are made to order in their Hollywood studio.

At the confluence of art and functionality, ROGIANI melds the highest in classic Italian design with the cutting edge of technical performance. Based in European couture, ROGIANI produces timeless, durable clothing to meet the dynamic needs of today.

Born in Terni, Italy, I attended KOEFIA Academy (International Academy of High Fashion and Costume Design) in Rome for my degree in Egyptology, the University of Perugia where I received a Graduate Degree in Pedagogia, and Academy of the Arts in Perugia, as well as receiving diplomas from Akane Kai Textile School and Kawai Art School in Los Angeles

I began my career with Raniero Gattinoni Couture and Fiouricci in Rome. When I came to Los Angeles, I worked as an image maker and stylist with legendary creatives including Hiro, George Hurrel, Greg Gorman, Herb Ritts, Matthew Rolston, Melvin Sokolsky, Michael Bay and Philip Dixon.

BCBG’s first fashion designer, I also designed for Z. Cavaricci, Emilio Cavallini and Claude Montana prior to launching my “NOBODY” line in 1986. In addition to serving as fashion editor for LA Style and View Magazine, I continued to share my experience with lectures and workshops, including Art Center College of Design in Pasadena , FIDM, Pepperdine and the Italian Cultural Institute.

Prompted by several of my A-list celebrity clients, I began to make fitness wear. With a background in martial arts and having been an athlete all my life, I embraced this throughly and launched ELISABETTA ROGIANI Couture Fitness and became “the designer for the new race of the fit”. 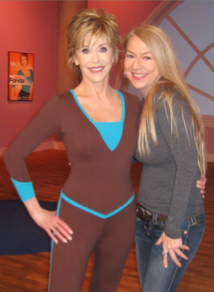 During our first meeting when Jane Fonda
grabbed my left shoulder, gave it a shake,
and said “You’re a genius!”,
I knew my vision was appreciated.